GearJunkie shares the final excerpt from Filson’s ‘Protectors of the Forest.’

While firefighters are busy containing and stopping the fires that destroy our forests, an equally important part of the story plays out inside a four-story-tall metal warehouse. Jayme Moye shares a rare glimpse inside the U.S. Forest Service’s Fire Sciences Laboratory, where scientists perform cutting-edge work in wildland fire research.

Inside the Fire Lab

Jason Forthofer watches the small circle of flames swirl upward into a vortex 12 feet tall, a phenomenon known as a fire whirl. In the forest, the occurrence can be deadly to wildland firefighters. On July 26, 2018, during the Carr Fire near Redding, California, a fire whirl emerged with tornado-like proportions — a circumference of 1,000 feet and wind speeds of 165 mph — and overran and killed a veteran firefighter.

But Forthofer doesn’t appear concerned. His fire whirl is ensconced in a large glass cylinder within a four-story-tall metal warehouse known as the Burn Chamber at the Fire Sciences Laboratory in Missoula, Montana.

The U.S. Forest Service’s Fire Sciences Laboratory, Fire Lab for short, is the only facility on Earth dedicated to studying wildfire through experiments in a chamber. The public rarely gets to witness the science and technology happening inside.

I secured a visit on a Friday afternoon in March by piggybacking on an annual workshop the Fire Lab hosts for a select group from the Institute of Journalism and Natural Resources. I was giddy for the demonstrations, for the chance to experience fire without fear. I would come away with so much more.

Within the Burn Chamber, Forthofer keeps his eyes on the spiraling blaze while explaining why he studies fire whirls. He aims to better understand what causes their vorticity, in other words what makes them spin.

The knowledge will enable him and his colleagues to begin to predict fire whirls before they occur in the wild, helping to keep firefighters out of harm’s way. Forthofer built the machine in 2008, in part to use as a demonstration tool to educate firefighters and fire managers. Most citizens, myself included, don’t know that fire whirls exist.

I watch the twirling inferno eat up all the oxygen in the cylinder in a span of about 40 seconds, then dwindle to a pencil-thin line and disappear. In a lab setting, I feel safe to admire the spiral’s grace and symmetry, and say so to Forthofer. He turns to me, his brown eyes animated with child-like wonder, and nods his head. “It’s a pretty neat phenomenon,” he says. 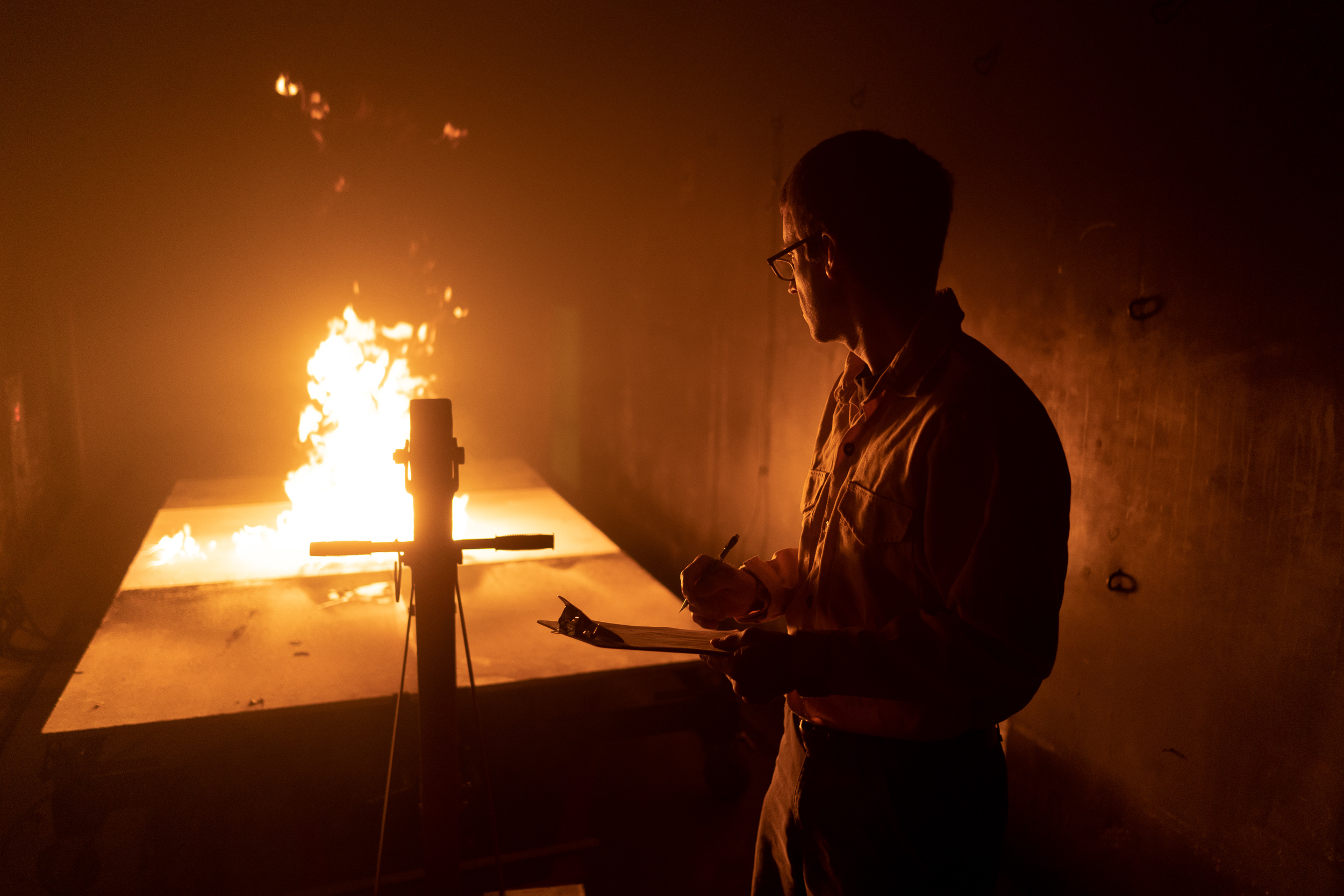 Beyond the two sets of extra-large metal doors leading from Burn Chamber, the innards of the Fire Lab are mostly offices. About 65 people, including university partners and contractors, work here. Greg Dillon, acting deputy program manager, leads me down the long, narrow hallway that bisects the office space, or what he calls “The Halls of Sciences.”

Since its founding in 1960, most of the Fire Lab’s research is for internal use by the U.S. Forest Service. But some of it crosses over into other applications, like WindNinja, another one of Forthofer’s creations. Forthofer originally developed WindNinja as a computer program to model how fire spreads.

It’s since been made into a mobile app, and is used in wind prediction for a variety of purposes that include wind surfing and simulating wind erosion on Mars. In June, Forthofer will be advising on the software at a wind-power generation conference in Ireland.

Employees of the Fire Lab are typically in high demand worldwide. As I step inside the office of Sharon Hood, a research ecologist, she shares that she recently returned from Turkey, where she consulted with scientists on a local tree species’ ability to survive fire.

Hood’s expertise is in forests and how they function. She spends 2 to 3 months a year in the field, and a significant portion of her spare time trail-running in Missoula’s Rattlesnake National Recreation Area and Wilderness. I notice her cellphone wallpaper is a tree. “The world’s largest larch tree,” she says. “It’s located in western Montana.” I point out that most people choose their dog or their kids for such a revered position. Hood laughs. “I like big trees,” she says.

Hood doesn’t think fire is bad for trees, ecologically speaking. She says that most forests in the U.S. have evolved with fire. In the Southeast where she grew up, fire is managed as part of a forest’s normal lifecycle. Florida, in fact, burns more every year than the Western states combined.

“We’re oftentimes quick to call a [forest] fire catastrophic because it has resulted in change,” says Hood. “I think it’s really hard for us as humans — with a 70- to 100-year lifespan — to understand that many forest species live hundreds, thousands, of years and that the changes we see in our lifetimes aren’t necessarily bad changes.”

I ask about the massive wildland fires out West that we’ve been seeing in the news the last couple of summers. Hood says those are often due to a history of suppressing fire in that region, which leads to an overabundance of forest debris and new growth, which in turn fuel these unnatural mega fires. 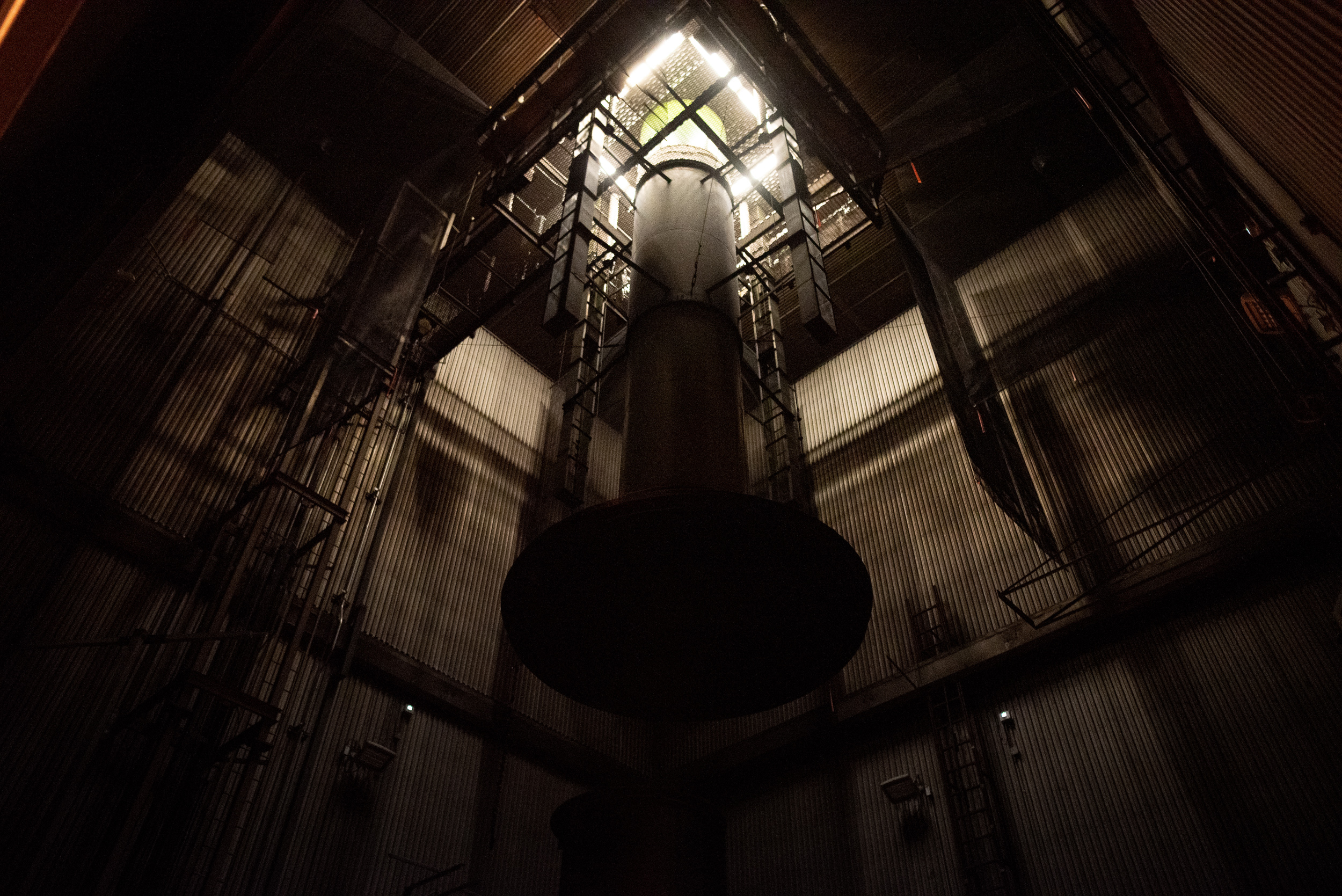 Besides mega fires, the top concern among scientists at the Fire Lab is forest fires that occur in what’s known as the wildland-urban interface — the transition area between wilderness and human development — and threaten communities and infrastructure.

Down the hall from Hood’s office, Forthofer is presenting on that very topic, to the folks from the Institute of Journalism and Natural Resources. I duck into the conference room, also wood-paneled, to find him standing at the front beneath a banner that appears to be a fire scientist’s mantra: Curiosity Pride Honesty Respect.

From the podium, Forthofer shares the story of the 2013 Yarnell Hill fire. Twenty members of Prescott, Arizona’s Granite Mountain Hotshots were sent into the mountains to protect the small town of Yarnell from an advancing blaze. As the men fought the fire, a nearby thunderstorm created a “gust front,” a rapid change in the wind’s speed and direction, which suddenly blew the fire straight into them, killing all but one.

Shortly after, Forthofer got the idea for a new tool, a computer program that predicts severe weather changes and gets the information into the hands of wildland firefighters in real time. Forthofer demos his Fire Weather Alert System, currently in beta, on the large screen behind him. He hopes it will prevent tragedies like Yarnell Hill.

Later, in private, Forthofer tells me that while earning his undergraduate degree in mechanical engineering at Montana State University, he worked for the Forest Service as a firefighter every summer. Even after taking a full-time job with the Fire Lab in 2002, he continues to spend 4 to 6 weeks in the field fighting fires because he loves it. And because it informs his desk job.

“My passion is the safety-related work — trying to protect firefighters — to develop tools and understanding that someday might save a firefighter’s life,” he says.

Forthofer walks me back to the Burn Chamber and up a spiral staircase to a second laboratory called the Wind Tunnel and Combustion Lab. Inside, I meet Torben Grumstrup, a research scientist focused on fire behavior. Grumstrup sits behind an industrial table with a control panel, facing a large window offering a view into a rectangular chamber about the size of a shipping container. 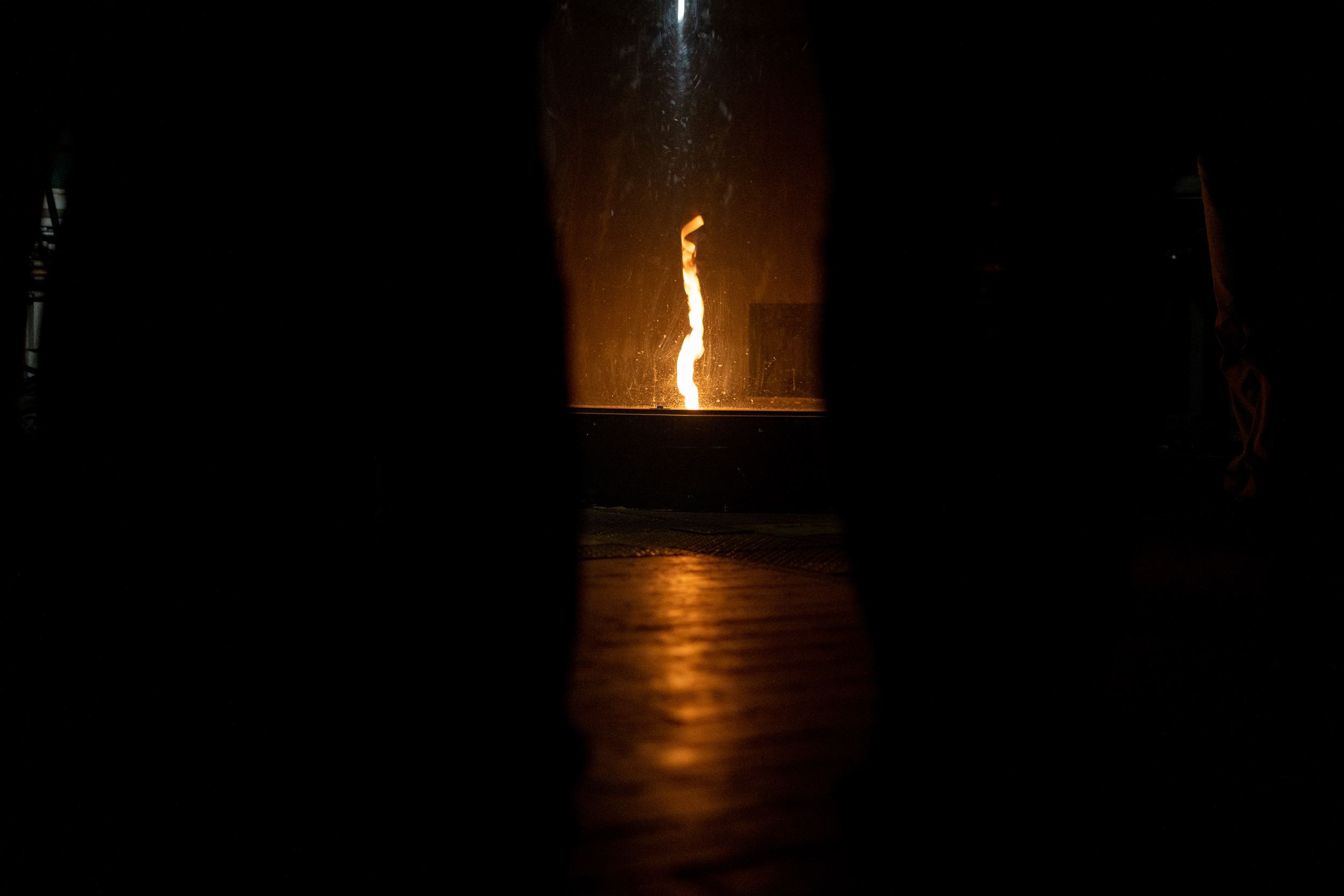 One of the many notable achievements to come out of the Wind Tunnel and Combustion Lab is the Rothermel Surface Spread Fire Model, a mathematical model for predicting fire spread in wildland fuels. It’s been an integral part of fire management since 1972. Research ecologist Matt Jolly tells me that one of the most exciting projects currently underway at the Fire Lab is a complete recalibration of that model, using the present-day weather conditions brought on by climate change.

Jolly and his colleagues are also using the Wind Tunnel and Combustion Lab to better understand flammability, specifically how the recent mega fires out West can burn straight through living plant matter — objects that Jolly says, in theory, shouldn’t burn due to their high moisture content.

“It’s a really interesting kind of intersection between plant physiology and the fundamental physics of fire behavior,” Jolly says, with a trace of an accent from his childhood in the foothills of the Appalachian Mountains in North Carolina.

Jolly exudes a brown-bear kind of friendliness: gruff yet warm. Dressed casually in a plaid short-sleeved shirt and hiking pants, he looks like he might have just stepped inside from a lunch break spent fly fishing. Our conversation about his nearly 15 years with the Fire Lab takes a turn toward the philosophical.

He tells me he envisions a day when the knowledge developed at the Fire Lab is used to build tools that start informing communities, not just the U.S. Forest Service. Like another one of Jolly’s primary responsibilities — the U.S. National Fire Danger Rating System, a system used internally to make preparedness and response decisions for wildland fire management.

It’s also a communication tool for the public, updated daily during fire season. Jolly hopes that more tools coming out of the Fire Lab can have the same broad reach. “Because, really, it’s the kind of knowledge that makes everyone safer,” he says.

When I leave the building 2 hours later, my head is spinning. The time I spent at the Fire Lab was fascinating and more than met my expectations. The next morning, I’m still thinking about the experience. Before I begin my road trip home across the border to British Columbia, I decide to go for a hike up Mt. Sentinel on the outskirts of Missoula. It seems a fitting way to begin to digest the concentrated information I’ve taken in.

The spring sun has melted most of the snow off the ridgeline trail and exposed the shaggy grasslands that blanket the foothills. After a steep-but-satisfying 3 miles, I reach the saddle and am rewarded with an up-close view of the massive trees of an old-growth ponderosa pine forest.

Based on their size, I’m guessing the forest is a couple-hundred years old. I think back to my conversation with ecologist Sharon Hood, the fan of big trees, in her office. She’d told me that if you know what to look for in a forest, there are clues about what’s been going on there for tens, hundreds, of years. “You can piece all those clues together and kind of listen to the forest,” she’d said. “It’s like reading a book almost.”

This article is sponsored by Filson. Learn more about the partnership between Filson and the U.S. Forest Service here.