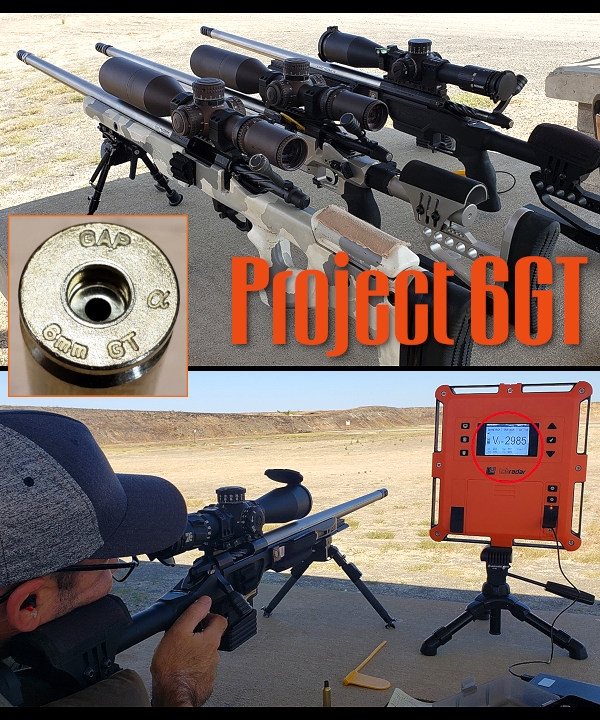 Report by Vu Pham
Earlier this year I was ready to build a 6 Dasher when I saw a lot of buzz on the interwebs about a new caliber George Gardner (Owner of GA Precision) and Tom Jacobs (Owner of Vapor Trail Bullets) designed, the 6GT. After some research and talking to George, I ditched the 6mm Dasher build and had GA Precision build me a 6GT on a GAP Templar action I already had in the safe. The reasons to try the 6GT in a new PRS-style rig were as follows:

2. Achieve a load that is reliable and predictable. The caliber must be easy-to-tune and predictable from barrel to barrel. I don’t want to spend weeks developing a new load each time I spin on a fresh barrel.

3. Be able to run the same mag in all my guns without having to tweak or use mag kits. The round must feed from AICS and AW magazines without major tweaking or hiccups.

4. Get good barrel life. The barrel needs to go 2200-2500 rounds with match-grade reliability and accuracy.

5. Have a competitive cartridge with the least possible recoil without sacrificing too much performance down range, compared to bigger options like the 6mm Creedmoor. 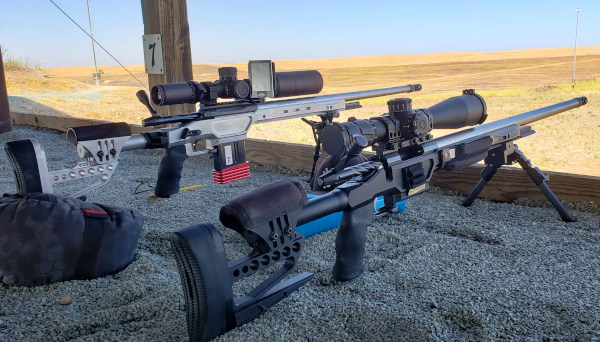 6GT feeding from un-modified magazines has been flawless in all the rifles we tested. The 6GT feeds so well, I sometimes have to do a press check to ensure there is a round in the chamber.

On paper the 6GT seemed like the perfect cartridge for PRS- and NRL-style competition. It has the low recoil of a 6 Dasher, with good feeding and mag compatibility. With the 6GT, a competitor can push 105gr bullets at 3000+ FPS or run heavier bullets at 2800-2900+ FPS. 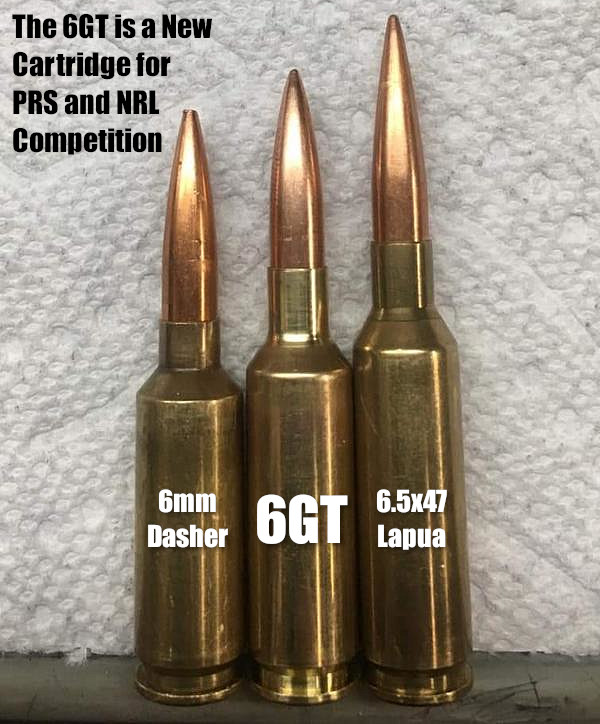 Knowing that I would initially have to make my own 6GT brass and do quite a bit of load development, I enlisted the help of Dan Bertocchini with CS Tactical. Dan has a lot more experience with wildcats and is the man when it comes to this type of data gathering. He has been running a 6 Dasher for a few years so I was curious how he would compare the 6GT to his 6 Dasher.

Quick Summary: “I am really digging the 6GT and the capabilities it offers. It can launch 103gr Vapor Trails at 3000+ FPS or lob heavy 115gr DTACs in the low-to-mid 2900s comfortably. I think we will see this cartridge go mainstream in PRS/NRL-style competition in 2020.” — Vu Pham 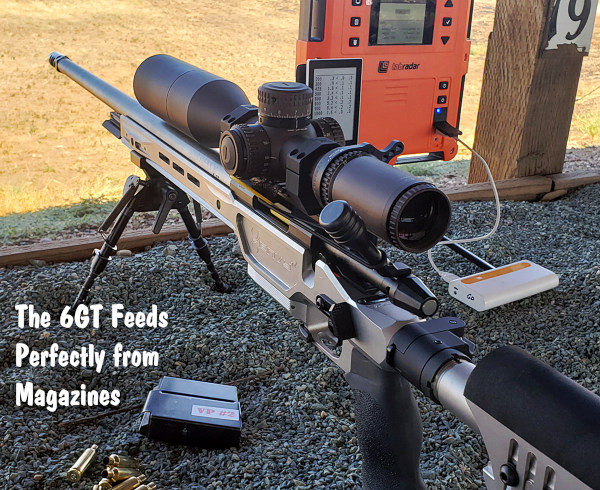 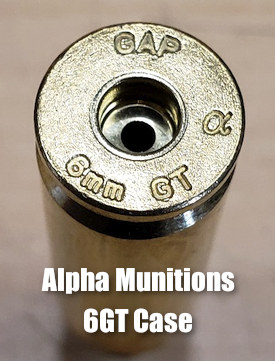 George Gardner was kind enough to send us 50 pieces of Pre-Production Alpha 6GT brass for preliminary testing. Like the cases I formed from 6.5×47 Lapua brass, the Alpha 6GT brass will use a small rifle primer. Price from Alpha Munitions should be $1.15 per case, which is on par with Alphan’s other product line.

The first 7000 pieces of Alpha 6GT brass sold before I could even get my hands on any! The bigger batch of production brass is due later this year. To pre-order the brass, CLICK HERE.

The major difference between 6.5×47 Lapua-formed brass and Alpha 6GT brass is the case capacity. Alpha 6GT brass has 1.5 to 1.7 grains more case capacity. When a piece of 6.5×47 Lapua brass is formed into a 6GT, the walls of the case now become the shoulder and part of the neck. In a normal piece of brass, the shoulder and neck are typically thinner because of the thickness of the brass tapering from the body to neck.

While the cartridge design was optimized for Hodgdon Varget, the extra case capacity of the Alpha 6GT brass opens the door to Hodgdon H4350 (my favorite powder) and Alliant Reloder 16.

Test Results with Alpha Munitions 6GT Brass
Initial test results were as expected from a premium brass-maker. Dan and I both got excellent Standard Deviations and Extreme Spreads over my MagnetoSpeed V3 and his LabRadar. This string below was with 112gr Barnes Match Burners and 33.8 grains of Varget. Can’t complain about a 3 FPS Extreme Spread!

Yes, H4350 Works with the Alpha Munitions Brass
Personally, I prefer running Alpha 6GT brass with H4350 rather than Varget pushing a heavier bullet. H4350 burns slower and cleaner which should equate to better barrel life. The Lapua-formed 6GT cases just do not have the capacity to reach the cartridge’s full capability with the slower burning powders.

Is the 6GT cartridge accurate? Definitely. Here is a 5-shot group at 600 yards shot by Dan. This was Alpha 6GT brass, with Hodgdon H4350 pushing Barnes 112gr Match Burner bullets. 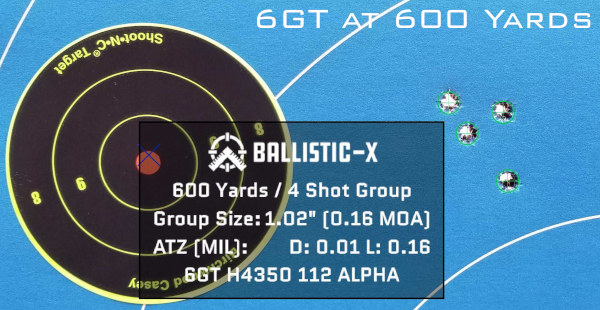 6GT Stress Test — Don’t Try this at Home!
Dan and I also did a “destruction test” to see how the Alpha 6GT brass would hold up when competitors push the cartridge to its limits. Please note that this is PRE-PRODUCTION brass and Dan and I probably exceeded max load for the majority of the duration of this test. Using Varget powder, we pushed 115gr DTACs at 2950+ FPS on a pretty hot day. We ran the charge weight up until the bolt was hard to lift. 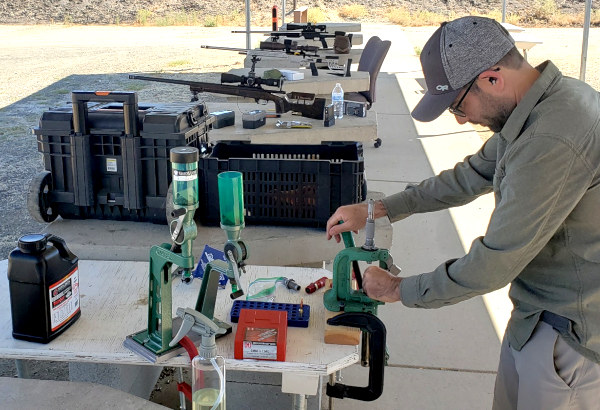 Using this very hot charge, we were able to get 14 firings before the primer pocket failed. That is pretty solid considering that this brass was a pre-production sample that Alpha said did not meet its primer pocket design requirements. With these results, I think a shooter pushing 110-115 grain class bullets in the low 2900s will get 16 to 20 firings from a piece of brass. 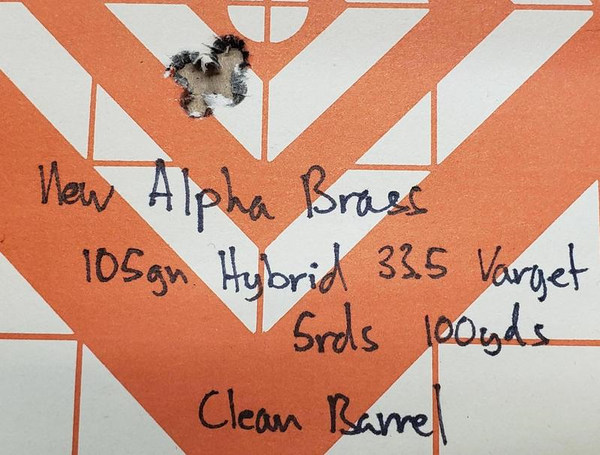 Is the GT here to stay?
All signs are pointing to “Yes”. Dies are readily available from Hornady, RCBS, and Redding. Chamber reamers are being produced by PT&G and JGS that can be purchased through GA Precision.

Alpha Munitions is hard at work getting quality brass to the shooters. Quite a few people have already chambered up 6GT barrels before they even have brass in hand. I think we will see this cartridge go mainstream in PRS/NRL-style competition in 2020. With Alpha Munitions production brass almost ready to hit the shelves, I think we will see a lot more data come in from the field by the end of this year.

The Verdict — The 6GT Is Looking Great So Far
I am really digging the 6GT and the capabilities it offers. It can launch 103gr Vapor Trails at 3000+ FPS or lob heavy 115gr DTACs in the low to mid 2900s comfortably. George Gardner has texted me some pictures of very impressive groups pushing an 115gr DTAC at 3000 FPS with Alliant Reloder 16 (a very temp-stable powder with a burn rate close to H4350). That being said, if a guy wanted to push that type of speed and bullet weight, the 6mm Creedmoor is a better solution in my opinion. So far my “go to” 6GT load is a 112gr Barnes Match Burner at 2900 FPS. My other favorite load is a Hornady 108gr ELDM at 2970 FPS.

I think the down-range performance of the 6GT over a 6mmBR and the 6BR variants will be valuable on those days where shooting conditions are not as perfect. Recoil is about the same as the 6BR variants (6BRA, 6 Dasher etc.), but noticeably less than a 6mm Creedmoor. The extra energy down range will make a spotter’s job a bit easier when targets extend beyond 800 yards.

Forming GT Brass from Lapua 6.5×47
Before the new Alpha Munitions brass was available, I tested the cartridge using 6GT made from parent Lapua 6.5×47 Lapua brass necked-down and reformed. George Gardner walked me through the process of forming 6GT brass out of Lapua 6.5x47L. The process is time-consuming and is a huge PITA even with the correct tools. More detailed instructions can be found on my 6GT thread on the AccurateShooter Forum. READ Forum Thread HERE.

Here is a photo of what the brass looks like going through the forming/trimming process.
Left to right: 6.5×47 Lapua brass, sized with the 6GT bushing die with a .266 bushing, chopped/trimmed and turned, and fired-formed. 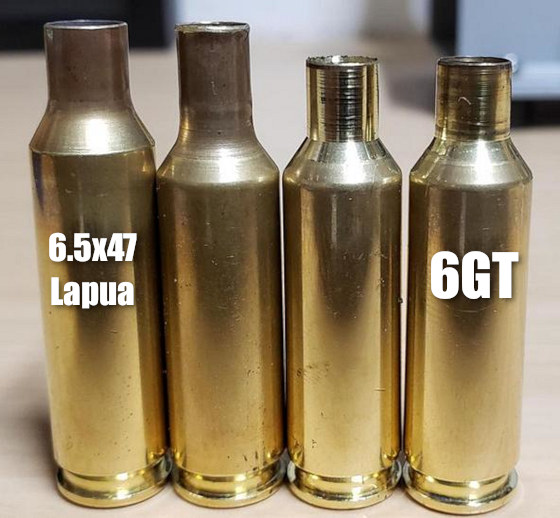 The formed-from-Lapua 6GT brass performed well and is a good option if one has the time and desire, but I’ll be moving over to factory Alpha Munitions brass once it is readily available.

6GT Tested at 1000 Yards
After seeing what Tom Jacobs is doing with his benchrest gun running Alpha Munitions brass, there is no doubt the 6GT is plenty capable out to 1000 yards and beyond. I have a feeling the Benchrest and F-Open guys are going to dig this new 6mm cartridge as well, at least for 600 yards. Note, in this photo it appears Shot #5 is under a paster, but that might just be a Ballistic-X software input error, meaning that this is actually a 4-shot group. Either way it is still impressive.