Jessica Saum always wore her dark hair long, but she decided it had to go.

She needed to get rid of it because she couldn’t shake the feeling of a gun pressed to her head during a robbery at a Chili’s restaurant several weeks earlier.

With her mom holding her hand, a friend who is a stylist put her hair in a ponytail and sheared it off. Saum cried quietly as the rest of her hair fell (to the floor) and she was left with a buzz cut.

“I wasn’t the same person anymore,’’ she said. “So I wanted to feel different.”

Saum’s life changed forever a year ago this weekend when she witnessed two friends who were her co-workers executed during a robbery at the Chili’s restaurant in DeWitt. The killer turned to her next. He put the gun to her head, and he pulled the trigger.

She and the others knew the killer, William Wood Jr., because he was a former worker at the restaurant. He has been sentenced to life in prison and may face the death penalty.

Saum, a 37-year-old mother who lives in Liverpool with her husband and four children, said she can’t shake the terror, shock and agony of what she saw and endured.

She sat down for an exclusive interview with Syracuse.com | The Post-Standard to talk about what happened and how it has changed her life. She talked in part because she doesn’t want people to forget her two co-workers and friends who were killed.

She also talked about one of her pillars of support: the mother of one of the men killed that night – Nancy Ruff Chappell.

“I have stopped working, and I need to be medicated to even leave my house,” Saum said. “I rarely ever go out of the house, and I’m too nervous to go out without someone with me. I just feel very vulnerable.”

She and two co-workers — Stephen Gudknecht, 37, and Kristopher Hicks, 29 – always worked the same shift. They were more than co-workers, they were like family. They texted daily, knew each other’s families and could talk for hours about anything.

Saum had just finished cleaning the back of the restaurant and Hicks was still cleaning the front. Marcus Isaac also was helping clean.

Saum almost left, but she decided to stay and wait for Hicks to finish.

Ten minutes later, they saw a man at the back of the restaurant with some sort of mask that looked more like a scarf.

At first, they weren’t alarmed.

They quickly recognized Wood because the disguise barely hid his identity, his voice and mannerisms were distinctive and his arm tattoo was visible, Saum said. She could see his eyes and thought he looked high. “Totally messed up,” she said.

They had given rides to Wood and lent him money. But this time he pulled out a gun. He assured them if they all did what he said they would all get to go home.

They were all just silent, and looked at each other, Saum said.

“There was a moment when we all knew none of us were leaving there,” she said. “He called us by our names… I knew I was going to die.”

He ordered the three of them — Saum, Isaac and Hicks — to lie on the floor.

She remembers Wood turning to her and saying “Jess, come lay down right here.”

Wood handed Gudknecht a black book bag and told him to go into the office and get him all the money. Gudknecht did, and asked Wood if he wanted the change, too.

Wood got $875 but wanted more. Gudknecht didn’t have access to the other drop safe.

That made Wood mad.

“You are just trying to be a hero,” Saum recalls Wood shouting at the manager. “You are trying to save the restaurant money … and then boom!”

Wood shot the manager in the head.

Before she could react, Wood shot Hicks – who was on the floor near her — in the head.

“I felt the gun against my head, and then I heard a click. In that second, I peed my pants. I thought of my husband, my kids. I couldn’t even breathe.”

Wood was smacking the gun – a Hi-Point 9mm semi-automatic pistol – in his hand. Saum jumped up.

“Please don’t kill me, I have four kids,” she remembers saying.

Saum ran into the office and slammed the door. Wood kept trying to fix the gun. Isaac ran out the back door. Wood escaped to a getaway car.

Saum, in the office with a dying Gudknecht, called 911. She held Gudknecht’s hand.

The dispatcher asked Saum if Gudknecht was breathing, and she said she thought so. Saum tried to apply pressure to his head wound and kept assuring him help was coming. At one point, she recalls telling the dispatcher he didn’t seem to be breathing anymore, but she kept holding his hand and talking to him.

When the police arrived shortly after, Saum unlocked the office door and let them in. Her ears were still ringing from the gunshots.

“I had so much blood on me they thought I was hurt, too,” she said.

Officers took her to the police station. She told them the killer was Wood. She even showed them a photo of him from her phone.

Wood was caught the next day.

“I think that gun jammed so I could be with Steve instead of him being all alone as he died,” she said. “I was saved for a reason.”

Today, Saum says she is no longer the person she used to be.

She has four children, 8 to 17 years old, and is terrified of them going to school.

She rarely leaves her home, and when she does it’s always with someone.

She won’t go the gym anymore, a big loss for her because she used to work out and had lost 70 pounds over two years.

She is nervous and shaky in crowds, so she avoids them. She managed to go her son’s graduation, but she was rattled. Her mother had to ask two officers working there if they could sit behind her. They did.

She worries about Wood’s accomplices: Will they get out of jail and find her?

Her husband works nights so he can be home with her during the day.

Saum takes five medications to deal with her anxiety and trauma, and she sees a therapist.

At home, she finds comfort in working on crossword puzzles, making pictures using stickers she applies with tweezers and relieving stress with adult coloring books.

She misses doing everyday things, like shopping for groceries or talking to her kids’ teachers in person instead of by phone.

Her family helps and she has come to rely on Gudknecht’s mother, Nancy Ruff Chappell.

Saum had known her before the killings because Chappell often visited the restaurant and Saum was friends with her son.

After the killings, Chappell reached out to Saum: She wanted to know what happened to her son that night beyond what the police told her. They texted and talked on the phone. Then they got together and Saum shared the story.

Chappell says she is eternally grateful to Saum for making sure her son didn’t die alone.

Chappell and Saum have remained close, often having lunch together. They draw strength from each other.

Saum says Chappell is her role model because she thinks she has handled her son’s murder admirably, moving forward and finding ways keep his memory alive. Saum said she wishes she could be more like that.

Saum has made it her mission to attend many of the court proceedings against Wood and the others who helped him. It isn’t easy.

She feels a chill when Wood walks into the courtroom, she said. Once, he winked at her.

At Wood’s sentencing Saum made a statement in court. She told Syracuse.com | The Post-Standard that she speaks out for the two murdered men “because I know Steve and Kris would have done it for me.”

She wants the death penalty for Wood.

Every day, her mind goes over it.

What if the gun had jammed right away?

What if there’d been cameras?

What if she’d been able to reach the panic button?

What if she’d left?

What could they have done differently so everyone could have walked out alive?

“I replay it in my head every day,” she said.

She feels guilty that she lived. She feels bad too that she couldn’t comfort Hicks as he lay dying the same way she did for Gudknecht.

“Kris was all alone, but I was way too scared to leave that office to find him too,” she said.

Many days she still she breaks down crying.

Saum, who is receiving workers’ compensation, said she hopes someday she can work again. But she says she won’t ever be able to work in restaurants, where she’s made her living for 20 years.

As the anniversary neared, she felt more vulnerable. One night, she couldn’t get her downstairs window to lock. She didn’t sleep that night. 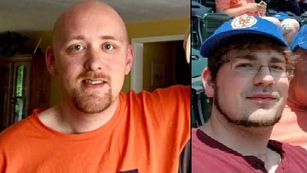 The families of Kris Hicks and Stephen Gudknecht want to remember the two men who were murdered at the DeWitt restaurant a year ago. They plan a fundraiser to help feed the homeless and to help fund a culinary institute scholarship.