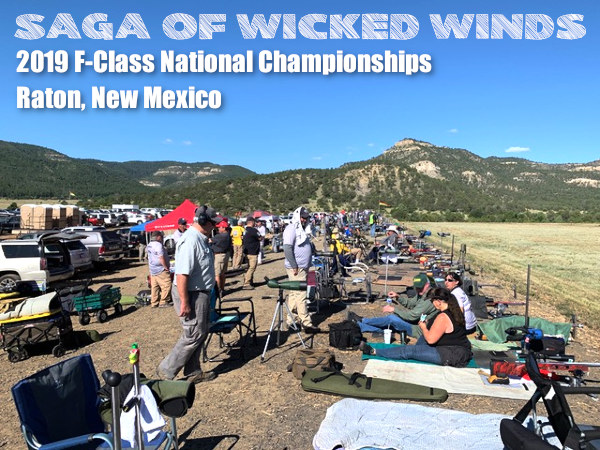 Mid-range team day. Team jerseys and tons of additional gear adorned the firing line. Most of the top teams had headsets so they could communicate in private.

The 2019 F-Class National Championships took place September 16-22 at the NRA Whittington Center in Raton, New Mexico. The Mid-Range Championships ran Sept. 16-18, while the Long-Range Championship finished the week, running Sept. 19-22. This year’s F-Class Championships were well-attended and memorable — as there were some of the most challenging winds many competitors had ever witnessed. Winds were strong, gusty, and shifty — with rapid and unpredictable direction and speed changes. Some seasoned, “world-class” F-TR and F-Open competitors dropped 20 points or more on a single relay — conditions were that bad at times.

Nonetheless, through skill, patience, and perseverance there were some outstanding performances at both the 2019 Mid-Range and Long-Range Nationals. Brian Bowling won the F-Open Long Range Championship with a 1573-78X score, ahead of second-place Keith Glasscock (1570-72X). Shiraz Balolia was F-Open High Senior, while Cindi Baudhuin was the top female shooter. In the other division, Jade Delcambre (Master Classification), won the F-TR Championship with a 1549-53X. Ian Klemm was a close second in F-TR with a 1548-44X. Skip Barkley was F-TR High Senior, while Jennifer Bondur was High Lady competitor. 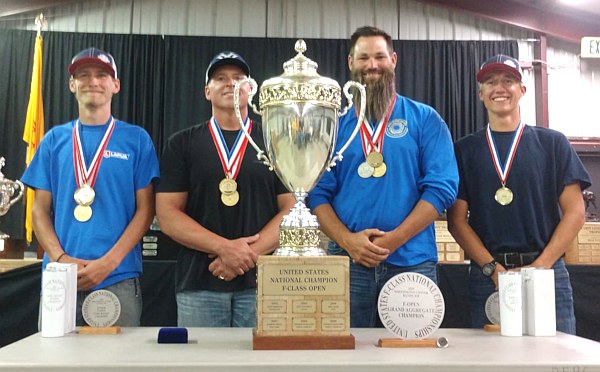 Here are some quotes from competitors, posted in our Shooters Forum:

“Today was, in a word, brutal.” — Turbulent Turtle

“I was on relay 1 and I don’t think I have ever shot in these types of conditions! I came off the second string and had dropped 14 points and people were saying “good shooting”!! Playing ping pong with the 7 ring was common. There was no chasing the spotter as every shot was a new condition.” — Shiraz Balolia

“Some relays were very easy wind-wise, and some were monsters! Relay 1 today got hosed like I’ve never seen! 35 mph winds, gusty and switching had most the top shooters doing their best to just stay in paper!” — Falconpilot 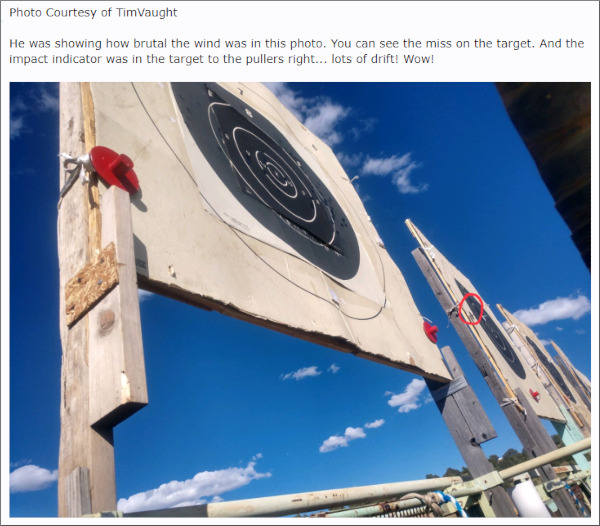 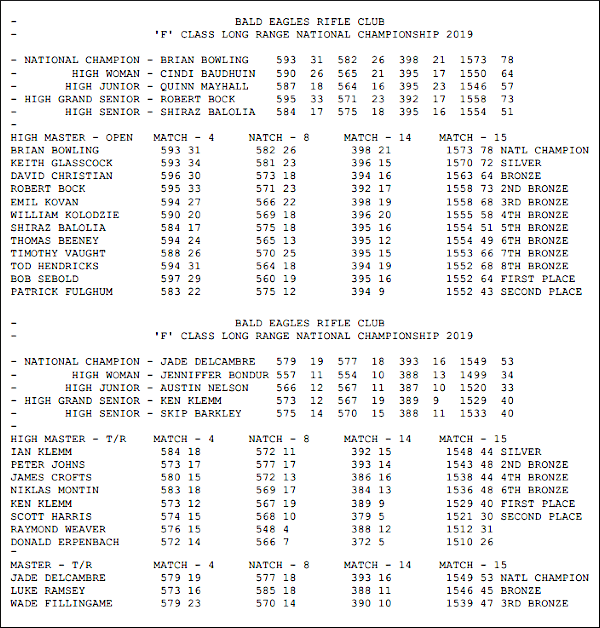 The Mid-Range Nationals were closely fought also. Congratulations to Timothy Vaught, 2019 Mid-Range F-Open Champion, and to Luke Ramsey, 2019 Mid-Range F-TR Champion. Both victors took their titles by a single point, although Luke had a huge ‘X’-count edge, with 101 Xs compared to 77 Xs for runner-up Tracy Hogg. Here are Top Five Mid-Range individual Results.

“The winds were by far the most challenging I have ever encountered, but I learned so much from that. I definitely came home a better shooter after the 2019 Nationals.”

Four of us from Tri-County Gun Club in Sherwood, Oregon loaded up and headed down to shoot two weeks of Spirit of America (SOA) plus the F-Class Mid-Range and Long Range Nationals. The first week of SOA was pretty straight-forward although the nearly 7,000-foot altitude had an immediate effect on our bodies, forcing us to hydrate like never before. We were going through upwards of 10 bottles a day of water and sports drinks to quench our thirst. 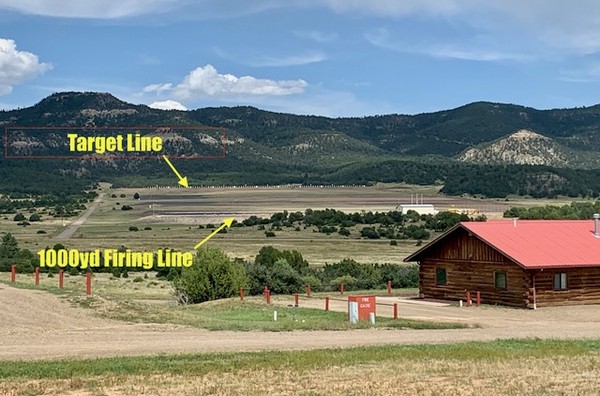 Here is a view of the 1000-yard range seen from the Founders Cabins up on the opposing hill. Raton is truly one of the most spectacular places you could ever shoot a match like this.

SOA is a Fullbore match so you shoot two to a mound and only have 45 seconds to take a shot. That requires you to make quick decisions based on ever changing conditions. I was fortunate enough to shoot for two days with Scott Harris who was an amazing partner. Scott even shared some of his amazing wind-calling wisdom with me. I was fortunate enough to win a couple medals during SOA and missed out on a second gold because of a stupid mistake — cross-firing on a target. That was heartbreaking to say the least. The final day of SOA brought whipping, switchy winds that played havoc with the last Long Range match and foreshadowed what what to come the following week.

Mid-Range started on Sunday and while it wasn’t a cakewalk, most shooters managed to work their way through the conditions. Raton has a funny way of keeping most everyone humbled one way or another. But nothing could prepare us for what was coming.

Here is a panorama image of the firing line for the start of the Mid-Range Nationals.

Long Range Nationals started on Thursday and everything seemed pretty normal. The ace shooters worked their way to the top as you would expect and we all went to bed expecting a normal day to follow, we had no idea what was in store for us. Friday started like any other day and the first relay went off without a hitch but as it ended we noticed the weather was starting to turn. As I headed to the pits the winds picked up and flags began going every which way. By the time targets went up for live fire we knew something bad was about to happen. Sighter shots came down and while not unusual to see low scoring shots for sighters, there were a lot of them. This was a 2 + 20 string so as soon as the two sighters were done we knew record shots were coming. When they did points started dropping like prices on Black Friday.

We saw people ping-ponging 7s, a few misses and everything in between. After two relays the dust settled and it was our turn to line up and shoot. During the switch over at the buses everyone was shaking their heads in disbelief of what happened to them and somehow seemed almost relieved to be heading to the pits. The conditions only got worse and by the end of the third relay people were rejoicing if they dropped anything less than 20 points.

Some of the biggest names in the game had dropped in excess of 20 points and there were reports of some people dropping as many as 40-50 points. Just imagine how bad the conditions had to be for the top 93 High Masters in the country to be dropping that many points. By the end of the day people we in stunned disbelief and many were considering getting shirts made that said “I survived Raton 2019″. 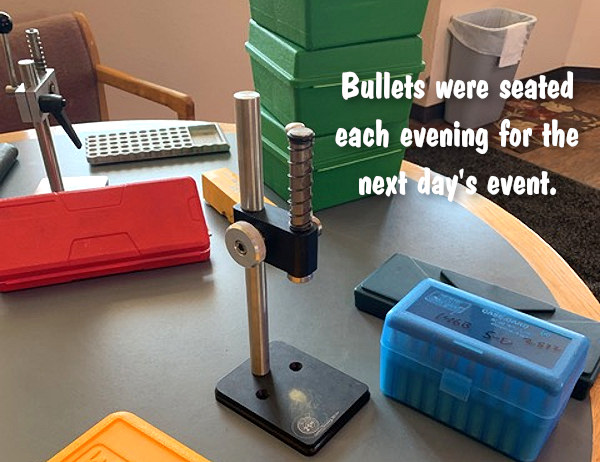 Every evening we would complete our nightly ritual of pushing bullets back. We initially loaded all our ammo set to the lands and then pushed the bullets back based on our testing each night.

Watching Brian Bowling Shoot To Victory in F-Open
As an F-Open shooter I was fortunate enough to be shooting a few lanes down from Brian Bowling and he was on fire all three days and was a pleasure to watch. Even in the worst of conditions he managed to skillfully hunt and peck his way to some amazing scores which led to him winning the National Championship. Keith Glasscock and David Christian gave a good chase over the three days but came up just a little short, earning Silver and Bronze places respectively.

Success for the Boys from Oregon
Below are me and my buddies from Oregon (L to R: Devin Wiggett, David Christian, Bill Brown, John Masek). As a group we won a total of 34 medals and trophies during the Spirit of America and the Nationals. Overall, the eight days of Nationals included some the most amazing shooting I’ve experienced, in some of the most scenic terrain in the country. I think I speak for many when I say that no matter how good or bad the shooting was, there was always a chance to learn and you couldn’t help but walk away a better shooter in the end. 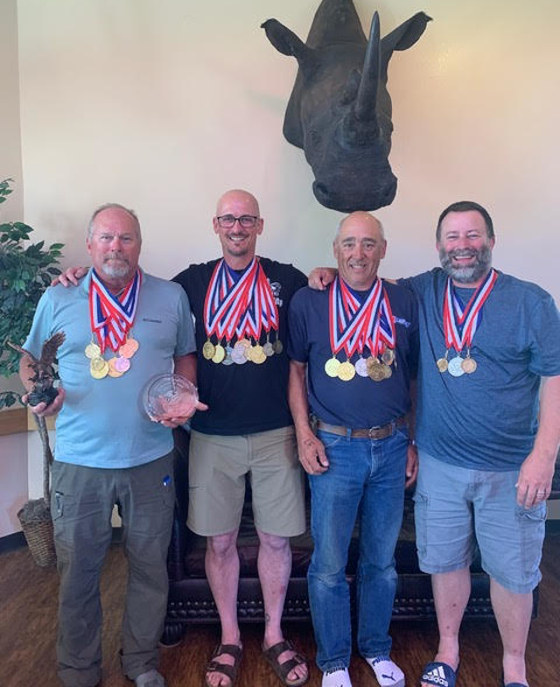 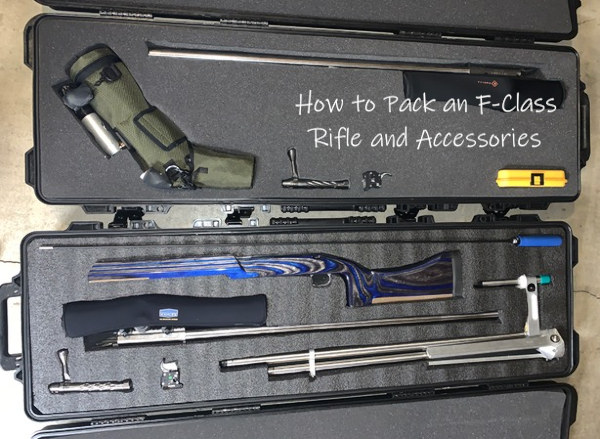 Q: How do you transport an F-Open Rifle, spotting scope, tripods, stand and lots of gear?
A: Get yourself some very big, sturdy cases, with lots of padding.

Here is my load-out for Raton. For the match I brought one stock and TWO complete barreled actions, with Kahles scopes fitted on each. I also had a separate large square case for my SEB NEO front rest, 21st Century Arbor Press, and 450 rounds of pre-loaded ammo.