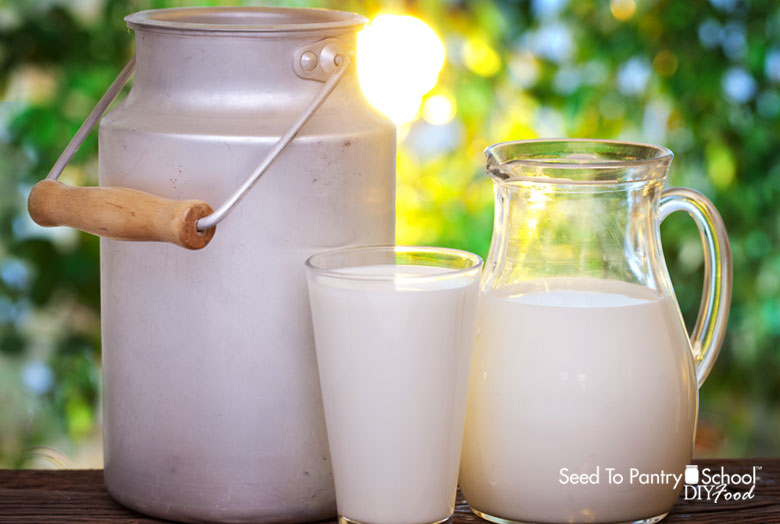 If you traveled through even fairly large cities around the year 1900, you would often come across something now illegal in most urban areas: milk cows. Dairy animals were not uncommon in cities, and it was often the task of young children to lead the animals to whatever grassy areas were available on the edge of town so they could graze.

In the last hundred years of urban migration, the number of home or small farm dairies has been greatly reduced. Who needed to keep a cow when it was so much simpler just to buy milk from the grocery store? As the population of rural areas emptied into urban centers, Americans became more and more disconnected from the source of all their dairy products… as well as more concerned about the quality of those products as dairies became enormous commercialized enterprises.

The current economic climate is changing all that. Once denigrated as rustic and unsophisticated, small farming is making an enormous resurgence as many people decide it’s important to return to their agrarian roots. Part of that interest includes milking their own cow or goat. As a result, one question which arises is whether or not it’s necessary to pasteurize milk that is home-grown.

The Age of Agriculture

Humans have been drinking milk since the dawn of agriculture. We have milked cows, horses, goats, yaks, buffalo, camels, and probably a bunch of other mammals (anything in a pinch, right?). And throughout much of the history of milk production, people have been subject to whatever contaminants have found their way into the milk.

While milk is unquestionably a superior food product which supplies us with calcium, protein, potassium, and calories (a critical consideration in some parts of the world), raw milk is often subject to contamination by E. coli, salmonella, campylobacteriosis, and listeria. Diseases passed by milk can include tuberculosis, diphtheria, strep throat, scarlet fever, and typhoid fever. Contamination can occur either from a sick animal or, more often, from mishandling of the milk (including handling by sick people). There is even evidence that Abraham Lincoln’s mother, Nancy, died of “milk sickness” after drinking contaminated milk from cows that had eaten the poisonous white snakeroot plant.

Who knew there could be such danger in drinking milk?  So what’s a home dairyist to do? 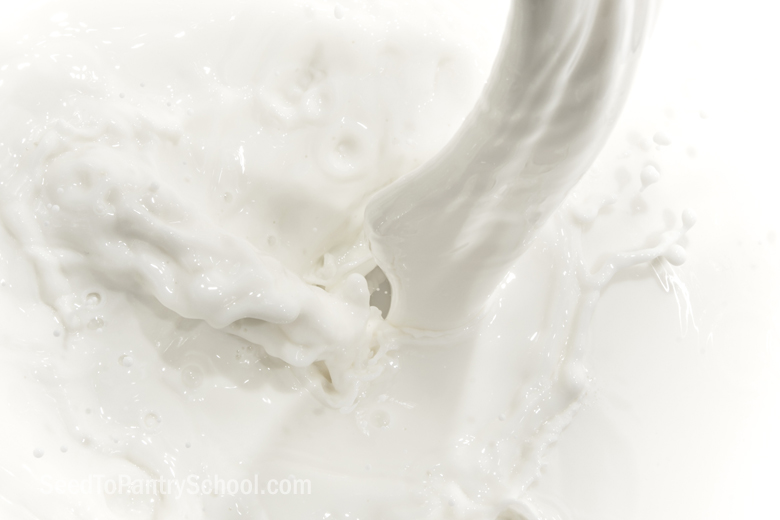 It was Louis Pasteur who first came up with the brainchild of pasteurization. Pasteur was a French chemist and microbiologist who had a series of remarkable medical breakthroughs in disease causation and prevention in the mid-1800s. His research led to reduced mortality from puerperal (childbed) fever and he created the first vaccine for rabies. Pasteur deduced microorganisms were responsible for spoiling milk and other beverages, which in turn led to people becoming sick. He developed the process we now call pasteurization, which kills viral pathogens and renders milk safe.

Quite simply, it’s the rapid heating and subsequent cooling of milk to kill off microorganisms within. Poor refrigeration and/or poor handling of raw milk, as well as questionable health of an animal, or unsanitary barn conditions, can cause microorganisms to grow and multiply, potentially causing disease. Pasteurization reduces this risk by an incredible amount.

By the way, pasteurization should not be confused with homogenization, which is simply breaking up the fat globules into smaller sizes so they no longer separate in the milk. Raw milk should also be distinguished from organic milk, which is defined as milk from cows raised and fed in prescribed ways (no growth hormones or antibiotics, access to pasture, etc.). Organic milk is sometimes pasteurized and sometimes not. It will say so on the carton. 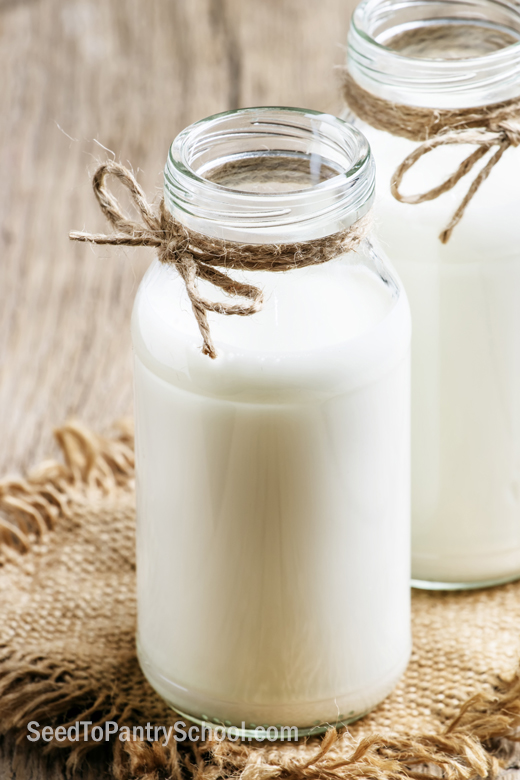 The Benefits of Pasteurization

It is impossible to overemphasize the importance pasteurization and refrigeration has had on public health in developed nations in the last 100 years. Even those who personally choose to drink raw milk cannot dispute the benefits pasteurization has offered to the public at large.

Pasteurization has allowed dairy farmers to distribute their milk to wider markets. That quaint vision of urban dairy cows led by children to city outskirts became impossible as cities grew larger. As laws changed, cows could no longer be kept by urban families. This meant milk had to be brought in from outlying areas and sold in stores. Refrigeration could keep milk fresh for up to a week; but until a few decades ago, refrigeration as a means of keeping products fresh was expensive and unreliable. Even when refrigeration worked, raw milk simply goes bad faster than its pasteurized counterpart. Pasteurization and refrigeration together made milk safe for those without access to fresh milk.

So with all these benefits, why on earth would someone choose not to pasteurize their milk?

The Drawbacks to Pasteurization

Putting aside the extremist claims that pasteurized milk is the cause of everything from cancer to dust bunnies under the bed, there are indeed drawbacks to pasteurization.

Taste, for one. If you’ve grown up on a diet of pasteurized milk, you’ll notice a taste difference right away when drinking raw milk (and vice versa). I seldom hear people say store-bought milk tastes better after drinking cold fresh raw milk. To some extent, this is a reflection on the cow’s diet. Your average family cow is fed much differently than your average commercial cow, with a diet much richer in grass and less full of grain. Kids love cookies, but they aren’t “bred” to live on cookies to the exclusion of healthier foods. Similarly, cows love grain but were bred to live on grass.

The process of heating milk in order to kill pathogens will also naturally kill some of the beneficial bacteria, vitamins, and enzymes found in fresh milk. Nothing is perfect, after all, and in the quest for “safe” milk, some of the benefits of raw milk are sacrificed.

There is some evidence consumption of raw milk during childhood provides protection against allergies, asthma and eczema. Others claim drinking raw milk is possible for those with lactose intolerance and will reduce or eliminate the symptoms of a host of other conditions such as asthma, diabetes, allergies, arthritis, heart disease, etc. However, data on these claims vary and are no doubt affected by the agenda of the researchers. Government representatives will seldom admit raw milk can be healthy. Nor will raw-food advocates admit pasteurization can be beneficial.

So What’s the Bottom Line?

In commercial dairies, the benefits of pasteurization (safety) are seen to outweigh the drawbacks (taste, possible health benefits). But to those people who are concerned about the dairy industry’s additives such as antibiotics, growth hormones, and even bleach to whiten the milk. The entire commercial dairy industry begins to seem, well, yucky.

Many people are concerned to the point of paranoia about germs and dirt and invisible creepy-crawlies. It doesn’t help that we can detect ever-smaller quantities of these microscopic terrors with the aid of modern technology. We can always count on the news media to whip these concerns into a frenzy whenever a true case of E. coli or salmonella come to light, forgetting that these cases are news-worthy because of their rarity.

The fact of the matter is, we have some of the safest food in the world. Hundreds of millions of Americans drink pasteurized milk their entire lives without a problem. Let us not forget this in our quest for ultimate purity of diet.

Personally, I would not buy unpasteurized milk products from a store. But neither will I bother to pasteurize my own milk products. I make yogurt, cream cheese, mozzarella and cheddar cheeses, and butter. The reason is that I know what my cow eats, how she’s treated, and how I handle her milk.

On the other hand, I have no doubt most dairies which supply raw milk to stores have ultra-clean facilities, über-healthy cows, and extraordinarily sanitary handling procedures. They have to because they are under the eagle eye of both government inspectors (many of whom are hostile against raw milk consumption) and customers. One slip and they’re history.

Some people may worry that pasteurization allows commercial dairies to get a bit sloppy in the cleanliness department because pasteurizing renders dirty milk safe. While there have been incidences of this, on the whole, commercial dairies are rigorously inspected for sanitation standards.

While some people advocate testing to ensure the safety of raw milk, there are problems with that. Milk contamination can occur sporadically and unevenly, so testing may miss contaminated milk. Also, while bacterial contamination may be below the detectable limit at the time of testing, bacteria are well-known for proliferating rapidly. By the time the milk is consumed, it could be rife with problems. The trouble with contaminated milk is it may look, smell, and taste just fine. Unless milk smells sour or has turned to sludge, you can’t detect the presence of E. coli or listeria by taste.

But I absolutely believe customers should be legally allowed to buy raw milk from farmers. It shouldn’t be the governments business if someone prefers to drink raw milk, and it’s in a dairyman’s best interests to supply raw milk to his customers that is clean, fresh, and sanitary. Give the customer what he wants. 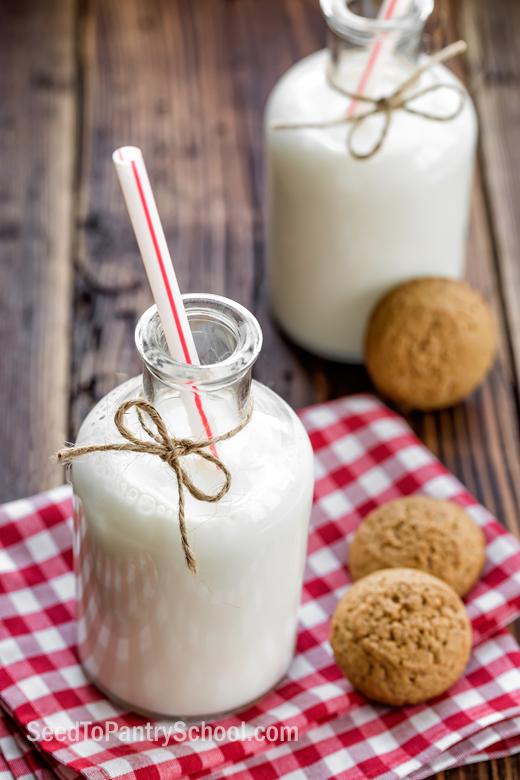 How to Pasteurize Milk

You can purchase milk pasteurizers for your home dairy. Prices range from $300 to $500. The advantage of a commercially-manufactured pasteurizer is consistent results. The disadvantage, obviously, is the price.

But it’s not hard to pasteurize your own milk. There are two standard at-home methods, the fast (flash), or slow system. Both require the use of a double boiler. A two-gallon pot nested inside a three-gallon pot works fine, and a lid to put over the upper pot.

In the flash method, heat the milk to 161°F and hold that temperature for 15 to 20 seconds, then cool. Don’t go above 161°F or the milk will taste cooked.

In both methods, rapid cooling is essential. Set the pot in ice water (replacing the ice when necessary) and stir the milk constantly until the temperature reaches 60°F, then stir occasionally until the temp reaches 50°F. A sterile stainless steel spoon is recommended.

Should you, as a home milker, pasteurize Matilda’s or Bossy’s daily output? Understand I’m talking about home milk production, not milk being sold in stores.

As you may have gathered, there are arguments to both sides. If your milk-handling procedures are not the cleanest or you lack suitable refrigeration – or you’re simply squeamish at the thought of raw milk – then by all means pasteurize. Additionally, if anyone in your family has a compromised immune system, pasteurization adds an extra level of safety to their diet.

However, I don’t pasteurize milk, and I doubt I ever will. That’s because I’m satisfied with my milk handling procedures, I have adequate refrigeration, and no one in my family has a compromised immune system. I’m not squeamish.

In the end, it’s up to you. This may not be the answer you wanted to hear, but it’s the only one possible.

Patrice Lewis is a wife, mother, homesteader, homeschooler, author, blogger, columnist, and speaker. An advocate of simple living and self-sufficiency, she has practiced and written about self-reliance and preparedness for over 24 years. She is experienced in homestead animal husbandry and small-scale dairy production, food preservation and canning, country relocation, home-based businesses, homeschooling, personal money management, and food self-sufficiency. She and her husband have been married 27 years and have two daughters.