Action pistol sports are more popular now than ever before. Just look at the number of handgun manufacturers offering pistols that are suitable for competition right out of the box. That’s right. Unlike in bygone days, you no longer have to send your pistol to a custom gunsmith for several months and spend beaucoup bucks to get a trigger job, a set of practical sights, frame checkering, some way of mounting an optic and other bells and whistles. Now all you have to do is take your race gun out of the box, top off the magazines, sight it in with your preferred load and step right up to the starting line.

I’ve been an avid competitor since the 1980s, so I wholeheartedly approve of these advances in the handguns used in the sport today. For this reason, when our editor broached the idea of using such pistols in our next “Battle Royale,” it took me about half a second to tell him “That’s a great idea!”

Of course, there are various action pistol disciplines, but we decided to restrict our test to those guns that are “legal” for USPSA’s Production division. In other words, each gun must be as close to factory stock as possible with iron sights, no barrel porting or compensators or weights, and only 10 rounds of ammo in each magazine. You only have to meet “minor” power factor requirements as well, so we chose only 9mm pistols: the European American Armory (EAA) Witness Elite Stock II, Sig Sauer P320 XFive Coyote, Springfield XD-M 5.25” and Walther Q5 Match Steel Frame (SF) Pro.

These pistols have a number of similarities and an equal number of differences. First of all, the Sig and Springfield utilize polymer frames and steel sides while the EAA and Walther are all steel. While some might feel comparing them is unfair, we thought it would be interesting to see if the pistols’ weights made a difference in the final scores.

All four have fully adjustable rear sights while the Sig, Springfield and Walther feature fiber-optic front sights. The EAA stands out with a traditional fixed front post as well as a double-action/single-action (DA/SA) trigger arrangement. The other three guns are striker-fired pistols.

The safety arrangements also differ to a marked degree. The Walther has a paddle in the face of its trigger that must be depressed before the trigger can be pulled. The Springfield has a similar trigger-mounted safety in addition to a grip safety. The EAA has an ambidextrous thumb safety, and the Sig Sauer depends solely on the longish stroke of its flat-faced trigger.

Each race gun featured checkered or textured grip frames for enhanced recoil control, and the EAA and Walther have removable grip panels. The Springfield is the only gun with interchangeable backstraps as well as a loaded-chamber indicator.

Once we received our test pistols, my wife, Becky, and I zeroed each from an MTM K-Zone rest at 15 yards and were pleased to see that all four were capable of producing groups 2 inches or less in size. We then field-stripped, cleaned and lubricated each pistol—the only maintenance they received. If one malfunctioned during the face-off, we would attempt to correct the problem at the range. If we were unable to do so, the pistol would be scored up to that point and then put aside while we finished testing the remaining handguns.

As in past “Battle Royales,” my friends Dick Jones and Richard Cole joined us for the range session, and we decided on the following drills:

The shooter faces four steel targets in a V-shaped formation at 10 and 15 yards with an 8-inch steel plate in the center at 8 yards. They lift their pistol and double-tap each target from closest to farthest before shooting the center plate. The score is the average time for four runs with a five-second penalty for any miss.

Ken Hackathorn created this drill, where the shooter engages three scattered USPSA targets at 3, 5 and 7 yards. The shooter begins with pistol at low-ready engages each target in order over three strings of fire. The first string requires two body shots on each target. The second requires three body shots to the first target, two to the second and one to the third. The third string requires one head shot to the first target, to body shots to the second and three body shots to the third target. Then the entire drill is repeated. The score is the total time plus a five-second penalty for any miss or shot fired out of sequence.

In the end, each shooter fired a minimum of 97 rounds from each pistol for 388 rounds from the four of them. We ended up expending close to 1,300 rounds, and I’d like to thank Hornady and Winchester for providing all of the ammo. The Target Barn and Competition Electronics provided ISPC cardboard targets and a Pocket Pro shot timer, respectively. Finally, as in previous “Battle Royales,” each pistol was graded on a 1 (worse) to 5 (best) scale in seven categories: reliability, ergonomics, trigger control, recoil control, sights, off-hand accuracy and reloading ease. These were then added together to give each pistol a final score in each category, with 15 being a perfect score.

Reliability: Three of the pistols received perfect scores in this category, and the only reason the Walther finished one point behind was that the slide did not go completely into battery on two occasions, forcing the shooter to push it forward. This happened with both brands of ammunition and when the pistol was clean and dirty.

Two shooters found the EAA’s safeties poorly positioned for easy manipulation, and another said the steeply curved trigger pinched his finger. All of us felt the Walther’s slide required an inordinate amount of effort to retract but also agreed the grip frame was excellent. One shooter said the Sig’s grip was very comfortable but felt the bore axis was too high.

The Walther ran away with this category with its light, SA-like trigger. The EAA and Springfield got high marks as well, except one shooter said the former’s SA trigger had a rather long stroke. One of us found the Sig’s flat-faced trigger just too “different” and did not care for it.

The EAA and Walther tied here thanks to their all-steel construction and checkered grip frames. although they only beat out the polymer-framed Springfield by one point. As these things tend to happen, one shooter gave the Springfield a perfect score while another said it had the heaviest recoil. The Sig’s high bore axis and subtle grip texturing caused it to suffer in this category.

The Springfield owned this category thanks to its tall, easy-to-see front sight, with its generously sized fiber-optic insert. The Walther’s low rear sight, with its shallow notch, caused it to finish in second place. It was unanimous that the EAA needed a fiber-optic front sight, and one shooter also found the rear sight too low. And while the Sig’s sights were tall and easy to acquire, we all found the front sight awfully narrow, allowing too much “daylight” on either side. But Richard, who freely admits to being color blind, gave the green fiber-optic front sight a thumbs-up, as he can see that color.

All four pistols provided sufficient accuracy for competition, and it was only the Sig’s thin front sight that caused it to finish in last place.

While we only performed a few speed reloads, all of the pistols had large, easy-to-access magazine releases and, thanks to their large mag well openings, the Sig, Springfield and Walther tied here with the EAA breathing down their necks.

In the end, we all agreed that, with a few caveats, any one of these four race gun variants would serve the competitive shooter quite well right out of the box. But I wanted to put my two compadres on the spot, so I asked each of them which would be their choice at the next match they attended. Dick chose the Walther because, as he put it, “It was the best of the breed. Light recoil, excellent grip, and the controls were all easy to use. What did you say the price was for one of these?”

Richard favored the EAA because of its “great single-action trigger, very comfortable grip, and it’s extremely controllable in rapid fire. Put a green fiber-optic sight up front and it would be just about perfect. In fact, I gave it a perfect score.”

I myself gave the Springfield a perfect score. I found it to have the best balance of the lot, the most controllable trigger, easy-to-see sights and light recoil. What’s not to like about it? 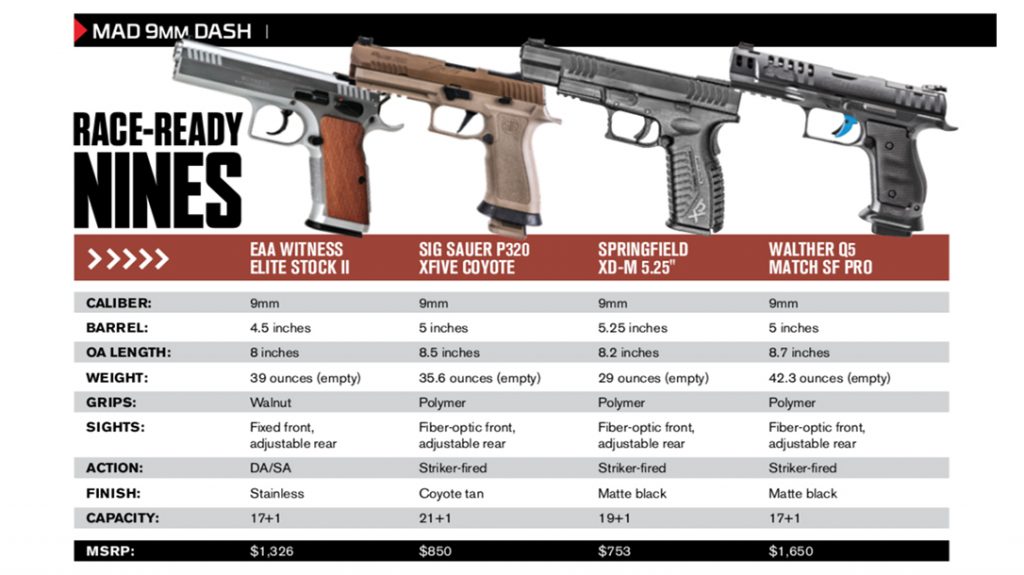 This article is from the November-December 2019 issue of Combat Handguns magazine. Grab your copy at OutdoorGroupStore.com. For digital editions, visit Amazon.